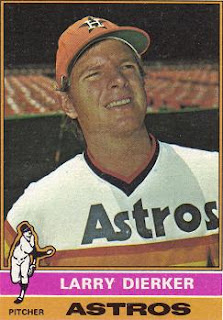 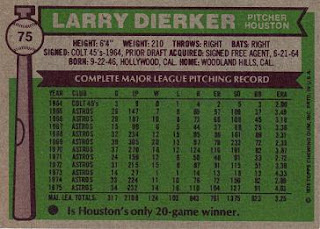 Larry Dierker had a very nice 14-year career (13 of those with Houston). His best year was 1969 when he won 20 games and had a 2.33 ERA. He made the All-Star team that year and again in 1971. Larry had a lifetime record of 139-123 with a 3.31 ERA. Here is a 1971 Sports Illustrated article about him.
His last season as a regular pitcher was in 1976. He went 13-14 with a 3.69 ERA that year. Dierker pitched a no-hitter against the Expos on July 9, 1976. Larry was traded to the Cardinals after the '76 season. He broke his leg during spring training and pitched only 39 innings for the Cards. He retired during spring training of 1978. He was only 31 years old.
Larry went on to be a color commentator for the Astros from 1979-1996. He then was named the manager of the Astros and guided them to four first-place finishes in five years. The Astros didn't have success in the playoffs, and he was fired after the 2001 season. He collapsed in the Houston dugout during the 1999 season and had to have surgery for a tangle of malformed blood vessels in his brain. Here is a description of the procedure Larry underwent. He missed a month but returned to guide the team to a division title.
He did some more broadcasting for the Astros and is now a community representative for the team. His number 49 was retired by the team in 2002.
Here is a little synopsis of his career.