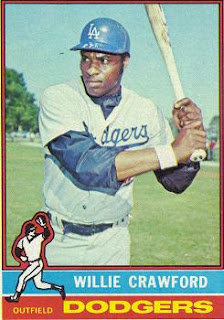 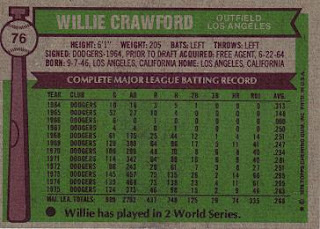 By the time this card was released, Willie Crawford had already been traded to the St. Louis Cardinals for Ted Sizemore. Willie had a pretty good career with the Dodgers. His best year with the Dodgers was probably 1973 when he batted .295 with 14 home runs.
Crawford batted .304 with 9 HR and 50 RBI for the Cards in 1976, but was traded to San Francisco after the season. He never played for the Giants, as he was traded to Houston before the 1977 season. He split the '77 season between Houston and Oakland and was granted free agency at the end of the year. He went back to the Dodgers, but didn't make the team and was released in spring training of 1978.
Willie died in his home in 2004 at the age of 57, apparently of kidney disease.
Posted by Matt Runyon at 6:33 AM