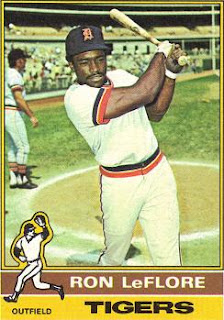 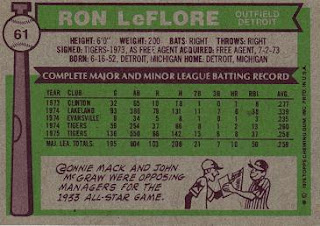 Whoops. I skipped #61. Ron LeFlore and Mark Fidrych came up in the same year. Their stories helped keep Tiger fans interested until the team came up with more good prospects.
Ron was serving 5 1/2 years for armed robbery when he was discovered playing on a prison baseball team. Detroit manager Billy Martin was able to get LeFlore signed (which met one of the conditions for parole) and Ron started his baseball career. After some time in the minors Ron was brought up in late 1974. He became a starting outfielder in 1975 and was successful as a speedy good-hitting outfielder who stole a ton of bases and had a little bit of power.
In 1976 Ron made the All Star team and batted .316 with 58 stolen bases. He led the AL in runs and stolen bases in 1978. Ron was traded to Montreal before the 1980 season for Dan Schatzaeder. He led the NL in stolen bases in 1980 with 97. After the 1980 season LeFlore signed with the Chicago White Sox as a free agent. His production fell off a bit and he argued about playing time with Tony LaRussa. Ron played two seasons with the White Sox and was released in spring training of 1983.
He must really have liked the number 11. He made 11 errors in 1974, 1976, 1977, 1978, and 1980.
Ron wrote a book called Breakout: From Prison to the Major Leagues, which was turned into the movie "One in a Million" starring LeVar Burton.
Here is a short April 2009 Sports Illustrated article about Ron and his struggles after his baseball career was over.
Posted by Matt Runyon at 8:48 PM