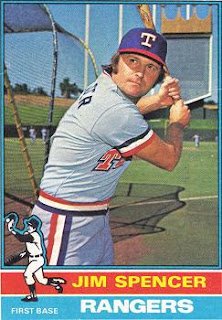 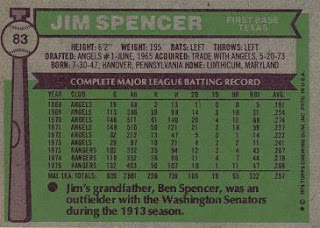 The back of this card says that Jim's grandfather played one season with the Senators in 1913. I wonder if young Jim ever spent time at Grandpa's house talking baseball.
Jim Spencer was a first baseman and DH for five American League teams from 1968-1982. He won two Gold Gloves (1970 and 1977) and was named to one All Star team (1973). He had some power, posting eight double-figure home run seasons. His best power year was 1979 when he hit 22 homers and slugged .596.
Jim came up with the Angels in 1968 and played with them until the middle of the 1973 season. He was only 22 when he won his first Gold Glove in 1970. Jim, along with George Scott, was considered to be the best fielding 1B in the AL in the 1970s. He had a few good power years for the Angels but was traded on May 20, 1973 with Lloyd Allen to the Texas Rangers for Mike Epstein, Rich Hand and Rick Stelmaszek. It's interesting that Jim made his only All Star team during a year when he was traded. Texas was pretty wretched that year, so perhaps they had trouble finding a representative for the team.
Jim played with the Rangers through the 1975 season. On December 10, 1975 he was traded to the California Angels with $100,000 for Bill Singer. The next day the Angels traded him to the White Sox. Jim played for the White Sox in 1976 and 1977. He had one of his better years in 1977, winning his second Gold Glove and hitting 18 homers.
After the 1977 season Jim was involved in a multi-player trade and was sent to the Yankees. Cash was involved--the Sox probably needed the money. Jim spent the next 3 1/2 seasons as a part-time first baseman for the Yanks. In the middle of the 1981 season he was sent to Oakland, where he finished his career in 1982.
After his playing career, Jim worked as a scout and a college assistant coach. He also made appearances at benefits for the Yankees. He died of a heart attack in Fort Lauderdale, FL On February 10, 2002.
Posted by Matt Runyon at 4:36 PM