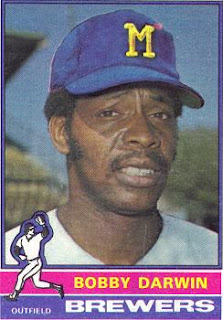 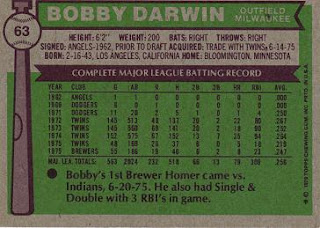 I like that "old school" Brewers cap!
At first glance it looks like he had a long career. He made his debut in late 1962 and played his last game in 1977. But looks can be deceiving.
Bobby Darwin started his career as a pitcher. In 1962 he started one game for the Angels and lost. Bobby then spent most of the decade as a minor league pitcher in the Angel, Oriole, and Dodger organizations. Despite an 0-6 record for AAA Spokane, Bobby was called up to the Dodgers in 1969. He didn't fare much better there - he had a 9.82 ERA in 3.2 innings.
Bobby missed the 1970 season, then resurfaced as an outfielder/pitcher in 1971. He played a bit for Spokane and for the Dodgers. After the 1971 season Bobby was traded to the Minnesota Twins for Paul Powell. Bobby became a starting outfielder for the Twins and played in 145 or more games the next three seasons. He had HR totals of 22, 18, and 25. Bobby also led the AL in strikeouts all three seasons.
On 14 June 1975 Bobby Darwin was traded to the Brewers for Johnny Briggs. He was a part-time outfielder for Milwaukee until June 1976, when he was traded with Tom Murphy to Boston for Bernie Carbo. In the remainder of the 1976 season he batted .179 for the Red Sox. Bobby didn't have much of a chance to play in 1977 so in late May he was traded to the Chicago Cubs for Ramon Hernandez. Darwin did some pinch hitting for the Cubs but was released in August 1977.
Posted by Matt Runyon at 5:03 PM