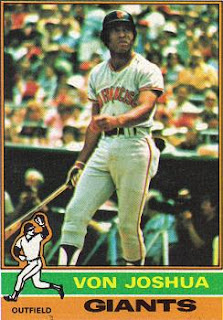 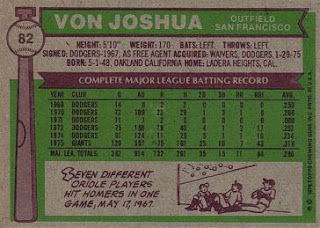 Von Joshua had a 10-year career as an outfielder for four teams. Joshua started with the Dodgers in 1969 but spent more time in the minors than he did in the bigs. He made it to the majors to stay in 1973. Von spent 1973 and 1974 with the Dodgers as a reserve outfielder. Von broke his wrist during the 1973 season and by the time he recovered he had been passed by the other players in the bountiful Dodger farm system. Von asked to be traded and he was selected off of waivers by the Giants before the 1975 season.
When this card was made, Von was coming off of his best year. In 1975 he batted .318 with 10 triples and 20 stolen bases. In the middle of the 1976 season Von was purchased by the Milwaukee Brewers. The Giants seemed to be involved in a lot of these types of transactions in the mid-seventies.
In 1977 Von batted .261 but only had a .286 on base percentage. In 1978 he didn't make the team and was released at the end of spring training. Joshua spent 1978 in the Mexican League and then was purchased by the Dodgers before the 1979 season. He spent one year with the Dodgers and then was claimed off of waivers by the San Diego Padres before the 1980 season. Von played for the Padres in 1980 but was released in August and didn't play again.
Since 1984 he's been a coach for various minor league teams. He is now the hitting coach for the Iowa Cubs.
Posted by Matt Runyon at 7:08 PM