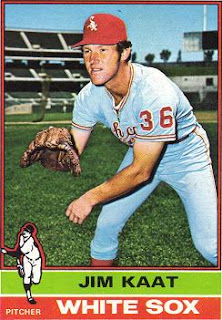 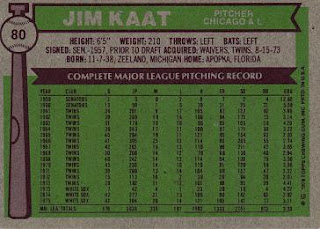 Sometimes I wonder what goes through a GM's mind when he's thinking about a trade. Jim Kaat was coming off of back-to-back 20 win seasons for the White Sox, but he was traded to the Phillies before the 1976 season. Perhaps the White Sox knew that Jim was close to the end of his days as a starting pitcher. Jim had three more seasons as a regular starter before he was converted to a reliever/spot starter in 1979.
Jim Kaat was one of those rare guys who played in four decades. He started with the Washington Senators in 1959. He pitched for the Senators/Twins until 1973, when he was put on waivers by the Twins. The White Sox picked him up and got 2 1/2 good years out of him. Here is a 1975 Sports Illustrated article about "Jim's Jolly Rejuvenation."Jim played for the Phillies from 1976 to the beginning of the 1979 season, then he was sold to the Yankees. He was sold to the Cardinals in April 1980, and he pitched for the Cards until his release in July 1983.
In 1976, Kaat went 12-14 with a 3.48 ERA for the Phillies. It was his last season in which he would have a double-figure win total.
Does Jim Kaat belong in the Hall of Fame? Here are some possible "yes" and "no" answers:
Jim Kaat was a broadcaster for many years after his playing days. He retired from regular broadcasting after the 2006 season. He now does a few games a year and does some work for MLB network. Here is an article about his broadcasting career.
Jim has a blog called Kaat's Korner
Posted by Matt Runyon at 7:12 AM