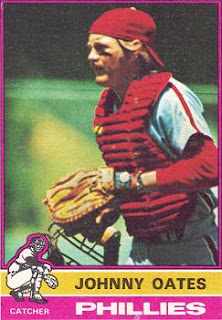 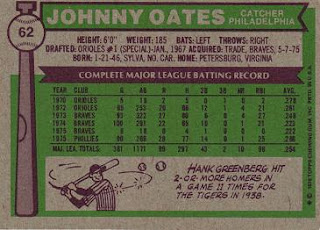 Johnny Oates was a catcher (mostly a backup) from 1970-1981. He played for five teams, and he didn't stay with one team for more than three years. He began his career as a regular in 1972 and retired partway through the 1981 season. Oates later jokingly admitted that he wasn't a great baseball player; "I still don't know how I got to the big leagues, because I wasn't that good," he said in a 2003 interview. "I was a slap hitter. I kept my mouth shut. I did. I kept my mouth shut. I couldn't throw. I couldn't throw a lick." His best season was probably 1975 when he batted .282 in 329 at bats with the Braves and the Phillies.
Oates is remembered more for his managerial career. After his playing days he did some coaching and managing in the minors. He was hired as manager of the Orioles in 1991 and managed them through the 1994 season. In those four years they had two third place finishes and one second place finish in the AL East.
He started managing the Texas Rangers in 1995. In his six-plus years as manager the Rangers won three AL West titles. Oates resigned early in the 2001 season.
Later in 2001 Johnny was diagnosed with an aggressive brain tumor (glioblastoma multiforme) and given a year to live. He managed to live for three years and died on Christmas Eve 2004.
Posted by Matt Runyon at 7:02 AM