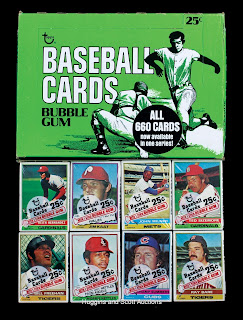 This is something I've been wanting to do, but I lack the graphic skills to pull it off. Ben, Mike, and Travis at The Baseball Card Blog made a "second set" of 1976 Topps Traded cards. This set includes deals that were voided (Vida Blue, Rollie Fingers, Joe Rudi, and Sal Bando) and deals that were made late in the season (such as Willie McCovey).

On the 1977 blog, I've been tracking which cards would be good as a "traded set candidate." I may give it a shot after the Topps set is finished.
Posted by Matt Runyon at 11:54 AM No comments: