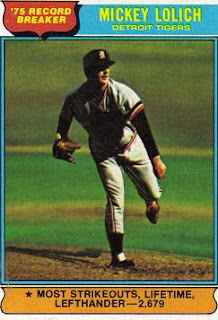 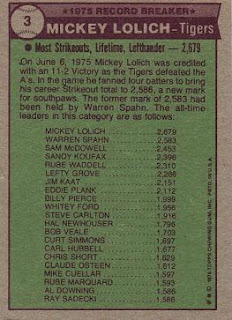 When seeing these "record breaker" cards, I sometimes wondered how long the record would stand up.
"Most strikeouts by a left-handed pitcher" is a relatively obscure record. Mickey Lolich ended his career in 1979 with 2832 strikeouts. Since then only two pitchers have surpassed this record: Steve Carlton and Randy Johnson. I think Carlton passed Lolich sometime in 1980. Johnson passed Lefty sometime in 2004. So Lolich didn't keep his record for very long, but Carlton held on to the record for about 25 years. Lolich does still hold the AL record for most strikeouts by a left-hander.
Lots of interesting names on this card. I liked to look up stats on names on the backs of these cards to find out more about them. I had a McMillan Baseball Encyclopedia that got a lot of use during those hot Arizona summer days when I didn't feel like going outside to roast in 110 degree heat.
Rube Waddell was a great strikeout pitcher, but his career was pretty short. Lefty Grove was another great strikeout pitcher. I'm surprised he didn't have more strikeouts in his career.
Posted by Matt Runyon at 7:17 AM