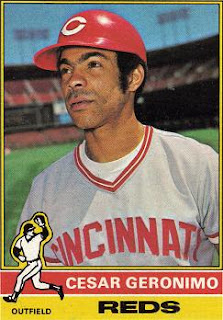 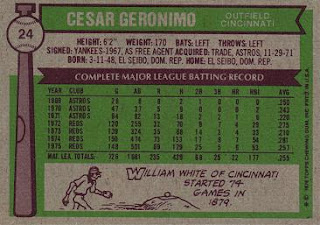 Cesar Geronimo was the center fielder for those great Big Red Machine teams of the 1970s. He was known primarily for his glove, but he had his best season in 1976 (.307, 22 steals). He won four straight gold gloves (1974-1977).
He came to the Reds as part of the deal that also brought Joe Morgan and Jack Billingham over from the Astros.
One interesting fact: Cesar was the 3000th strikeout victim of both Bob Gibson and Nolan Ryan.
He was inducted in the Reds Hall of Fame in July 2008.