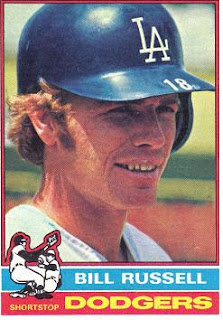 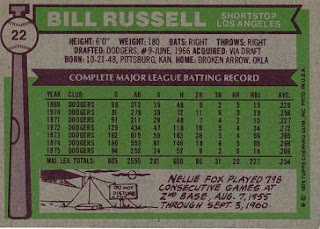 Bill Russell was the shortstop for the famed Dodger infield of the 1970s. He was the only one to stay with the Dodgers for his entire career. It's interesting that the only categories he ever led the league in were games played (162 in 1973) and intentional walks (25 in 1974). One doesn't think of Bill Russell as the type of guy who was feared enough to put on first base. He was probably batting 8th and was walked a lot in order to get to the pitcher's spot in the order and force Walter Alston to make a pinch-hitting decision.
Bill was coming off of his worst season. He had surgery before the 1976 season to remove calcium and a bone chip from his right shoulder, which was like the reason for his low numbers in 1975. He bounced back to hit .274, play in 149 games, and be selected to the 1976 All-Star team. He was selected to three All-Star teams (1973, 1976, and 1980) in his career.
After his playing career he coached and managed in the Dodgers system and then succeeded Tommy Lasorda as the manager of the Dodgers. He lasted a couple of seasons before being let go after a change in ownership. He now works for Major League Baseball in the umpiring division.
Posted by Matt Runyon at 7:53 AM