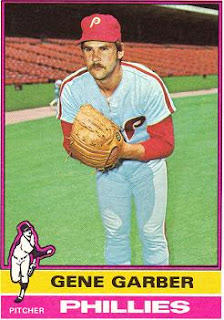 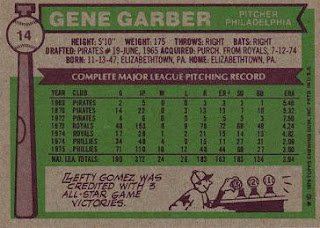 Gene Garber had a 19-year career as a reliever, mostly with the Atlanta Braves and Philadelphia Phillies. When he retired in 1988, he ranked 5th all-time in appearances with 931. He now ranks 17th on that list. Garber is often remembered for his exuberant reaction after striking out Pete Rose to end Rose's 44-game hitting streak in 1978. Here is a good Baseball Digest article from 2004 about Gene's memories of that game and his career.
Out of the players who had over 30 plate appearances against Garber, the guys who hit him best were Johnny Bench (.385, 4 HR), Phil Garner (.406), and Dusty Baker (.385). Batters who didn't do well against him included Steve Garvey (.193), Ron Cey (.191), and Davey Lopes (.143).
He is a farmer in Lancaster County, Pennsylvania and is chairman of the Lancaster County Agricultural Preservation Board. He and his sons raise poultry for eggs, emus for "Emu Oil," and grow corn, wheat, soybeans, and barley.
Posted by Matt Runyon at 5:19 AM