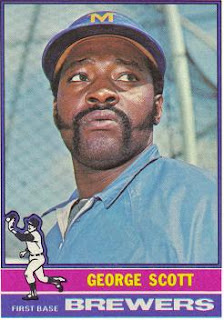 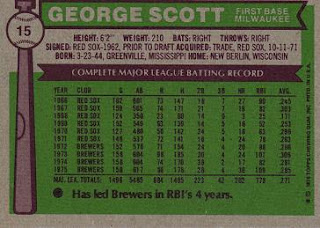 George Scott was a big dude who had a great glove and good power. "Boomer" won eight gold gloves in his career. George started his career in 1966 with Boston, where he was popular with fans and players alike. George was only the second rookie firs baseman to start an all-star game (Walt Dropo was the first). He had several battles with manager Dick Williams about his weight during this time.
He went to Milwaukee in 1972. He had a great year in 1975 (he led the league in HR with 36 and in RBI with 109). After the 1976 season he was traded back to Boston for Cecil Cooper. He played two more seasons with Boston before finishing his career with the Yankees and Royals in 1979. After his major league career was over, he played and managed in the Mexican League. He later managed in various independent league teams until 2002. He is now retired and is living in his hometown of Greenville, Mississippi. Here is a nice biography of the Boomer.
"When you're hitting the ball, it comes at you looking like a grapefruit. When you're not, it looks like a black eyed pea." - George Scott in Baseball's Greatest Quotes (1982)
Posted by Matt Runyon at 7:55 AM