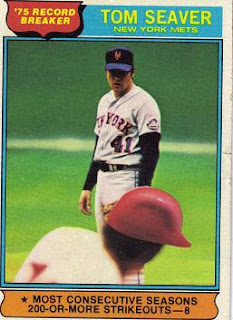 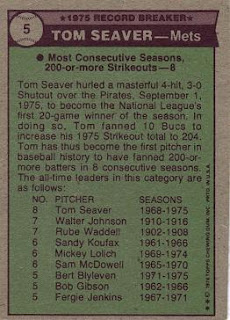 Tom Seaver would strike out 235 batters in 1976, but that was the last season in his streak. He barely missed striking out 200 in 1977 (he whiffed 196) and then struck 0ut 226 batters in 1978. He would never again come close to striking out 200 in a season.
It looks like this record will be a hard one to break. It takes a rarely-seen combination of ability and durability.I looked at some other recent strikeout pitchers to see if anyone broke this record. I checked Nolan Ryan, Randy Johnson, and Roger Clemens. None of them came close to nine straight years of 200 or more strikeouts. Did I miss anyone?