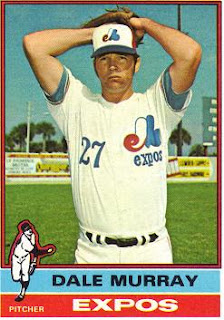 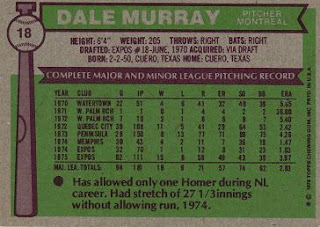 Funny how this card came up next. I just played a Strat-O-Matic game (Mets @ Expos) and Murray took the loss in the game. I'm doing a 1976 replay and will be posting results on my other blog every couple of weeks (or when something major happens).
Dale Murray had a 12-year career as a reliever for five teams. He pitched his first three seasons with Montreal and put up some pretty good numbers, especially considering how awful the Expos were. He and Woody Fryman were traded to the Reds after the 1976 season for Tony Perez and Will McEnaney. That was the first trade that I remember getting upset about. I was a big Reds fan at the time and didn't want to see Tony go.
It looks like he had some injury problems in 1980 and 1981, as he only pitched a total of 44 2/3 innings. He bounced back with probably his best year for Toronto in 1982 (8-7, 11 saves, 3.16 ERA, 111 IP). He then went to the Yankees in a trade that netted the Blue Jays Fred McGriff. The Yankees also threw in $400,000 in the trade! Rob Neyer has a piece about this trade in his Big Book of Baseball Blunders. Murray pitched a couple more seasons with the Yankees and Rangers before retiring in 1985.
At least Dale can brag that he's been traded for both Tony Perez and Fred McGriff.
Posted by Matt Runyon at 4:22 PM