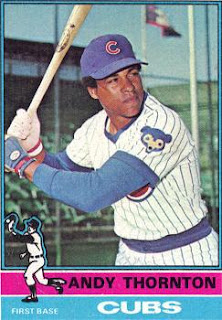 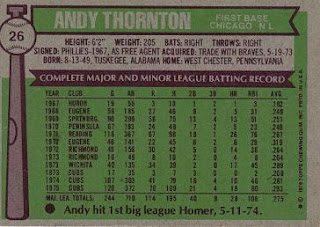 I don't remember Andre Thornton's time with the Cubs. He didn't register on my radar until he started playing for the Indians.
Andre started with the Cubs in 1973. He had a pretty good year in 1975 (.293, 18 HR, 60 RBI), but he was traded to the Expos after hitting only .200 for the first part of 1976. He finished the year with Montreal, batting .194 with them. He was unknowingly playing with a broken finger, which would explain the falloff in production.
Andre was then traded to the Indians for Jackie Brown. Brown won 9 games with the Expos in 1977 and then was out of the majors. Thornton went on to have a nice career with the Indians.
Andre had to deal with personal tragedy after the 1977 season. He was involved in an automobile accident which killed his wife and his three-year-old daughter. Andre and his four-year-old son survived. Andre missed the entire 1980 season due to knee surgery. Andre played for the Indians until 1987 and was productive most of the time. Here is a nice article about Andre's career.
Andre Thornton also sticks out in my mind because he was killed by a pitch in a tabletop baseball game I was playing. The game was called "Time Travel Baseball" and it used a different set of rules for each era of baseball. The game came out in 1979 or so. I was playing a "21st century" game and on some sort of rare play, Thornton was killed by the pitch. I wrote, "Dead-Do Not Use" on the card and didn't use it again.
Posted by Matt Runyon at 4:37 PM