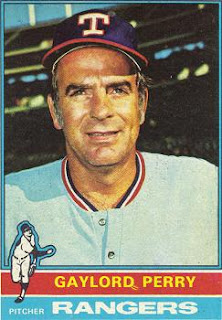 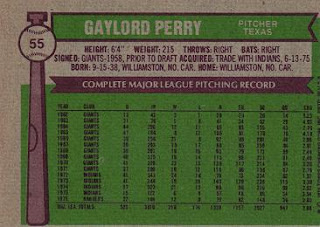 In 1976 Gaylord Perry was about 2/3 of the way through a career that seems like it lasted forever. He started his career with the SF Giants in 1962 and didn't hang 'em up until 1983. Perry was a five-time All Star who won 314 games in his career. He won a Cy Young Award in both leagues (1972 with Cleveland and 1978 with San Diego) and won 20 or more games five times.
I saw Perry at an old-timers charity game several years ago. He wore a generic jersey with the insignias of all eight teams he played for sewed on the front. It was good for a few laughs. Here is a good biography of Perry's career from the SABR Biography Project.
Posted by Matt Runyon at 5:08 AM