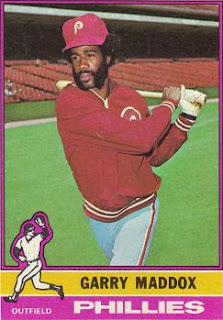 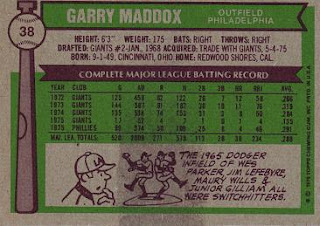 "Two-thirds of the Earth is covered with water, the other one third is covered by Garry Maddox" - the late Harry Kalas
(also attributed to Ralph Kiner)
Garry had his best year in 1976 as he helped the Phillies to their first division title and first playoff appearance in 26 years. He won the second of seven straight Gold Glove Awards, batted .330, and was fifth in MVP voting. The Phillies wouldn't make it to the World Series until 1980, but they had some great teams in the late 70s and early 80s.
Garry originally came up with the Giants. The Giants really had an embarassment of riches in the outfield during the seventies. They also came up with Gary Mathews, Dave Kingman, Jack Clark, George Foster, and Bobby Bonds. Maddox was traded to the Phillies in 1975 for Willie Montanez, who was supposed to replace Willie McCovey at first base. That didn't work out well for the Giants, as Montanez was traded the next season.
Garry continued to be a good player for the Phillies through the 1984 season. He didn't have a good year in 1985 and was released after the season. He came back to the Phils for a few games in 1986 and then retired.
Garry went back and finished his degree after his playing days and is now a successful businessman in Philadelphia.