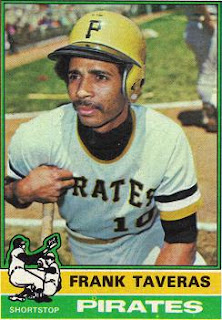 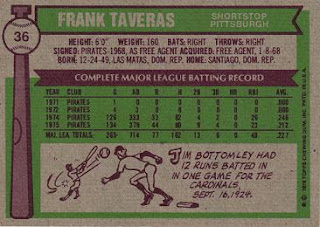 Frank Taveras was Pittsburgh's starting shortstop for a few years in the mid-late seventies. He didn't hit much, but he stole a lot of bases. He was traded to the Mets early in the 1979 season for Tim Foli, so he missed out on being on a World Championship team. The trade also allowed Frank to lead the NL in games played with 164. Every season he played, Frank had a fielding percentage below league average. Frank finished his career as a second baseman with the Montreal Expos in 1982.
Posted by Matt Runyon at 5:19 AM