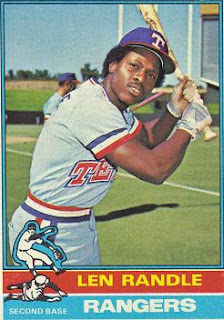 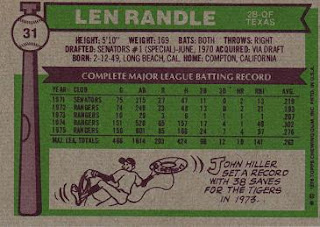 Len Randle was a utility player in the 70s and early 80s for five teams. He is probably best remembered for punching out his manager Frank Lucchesi in 1977 after Lucchesi gave the starting 2B job to Bump Wills. Randle was charged with assault and traded to the Mets. He went back to the minors in 1979 and played for the Phoenix Giants for part of that year. I went to a lot of those games, but I don't remember him being on the team.
Randle was one of those guys who had some value on an APBA or Strat-O-Matic team because he played so many positions.