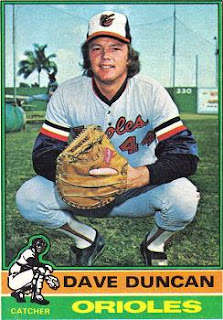 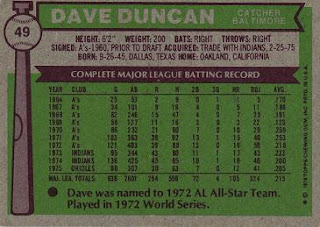 In 1976 Dave Duncan was in the last year of an 11-year career as a light-hitting catcher for Oakland, Cleveland, and Baltimore. He was named to but did not play in the 1971 All-Star game. This card says 1972, but I think that's a mistake. His highest similarity scores are Ron Karkovice, Wes Westrum, Ed Hermann, and George Mitterwald. Dave did have a little bit of power--he had double-figure HR totals in six seasons.
After his playing career, Dave spent some time coaching with the Cleveland Indians and then was the Seattle pitching coach in 1982. He then joined Tony LaRussa and has coached with him ever since. This season Dave broke the record held by Galen Cisco for serving as a major league pitching coach. This is his 29th season in that capacity. Here is an article about Duncan's success as a pitching coach.
Dave has two sons (Shelley and Chris) who have played Major League Baseball.
Posted by Matt Runyon at 4:55 PM