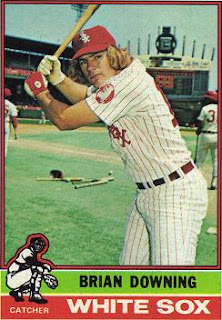 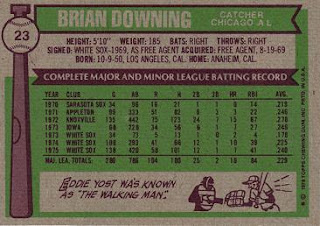 In 1976 Brian Downing was just another one of those long-haired guys that probably wouldn't be around very long. His stats weren't very impressive. He suffered a major knee injury on the first pitch of the first inning of his first major league game in 1973. He came back from the injury but struggled in his years with the White Sox
He was traded to the Angels before the 1978 season in part of one of the many Bobby Bonds trades of the decade. He didn't do a whole lot in '78, but he started a weight-training program and had an All-Star season in 1979, batting .326. He broke his ankle in 1980 and subsequently was converted to the outfield. He wasn't known for his defense, but he was sure-handed with what he could get to. He was a productive player for the Angels through the 1990 season, hitting at least 20 homers in 6 of 7 seasons from 1982-1988. He finished his career as a DH with Texas in 1991 and 1992. He will be inducted to the Angels Hall of Fame on 4/7/2009.
Someone wrote a very nice little piece about what Brian Downing meant for him. It is found here.
Posted by Matt Runyon at 4:00 PM