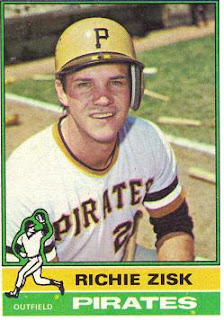 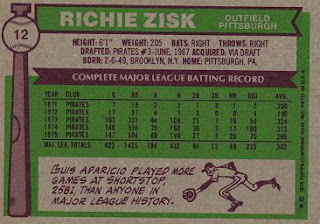 Richie Zisk was a good-hitting outfielder in the 70s and early 80s. Richie replaced Roberto Clemente in RF in 1973 and then moved to LF in 1975 to accomodate Dave Parker. He had four nice years with the Pirates from 1973-1976 before being traded to the White Sox with Silvio Martinez for Goose Gossage and Terry Forster. Apparently Pirate manager Danny Murtaugh thought Zisk was "a lazy dreamer."
He hit 30 homers and started the 1977 All Star game in LF for the American League. He left the Sox after the season and signed with Texas as a free agent (he signed a 10-year contract!). He started the 1978 All Star game in RF for the AL and had three good years with the Rangers. He was then traded to Seattle, where he finished his career in 1983. He was exclusively a DH with the Mariners. Multiple knee operations and a wrist injury hastened the end of his career. The Mariners didn't officially release him until January 1985.
Sports Illustrated in 1982 had a little blurb about strange items players kept in their lockers. Zisk kept a voodoo doll in his locker.
Posted by Matt Runyon at 6:57 PM