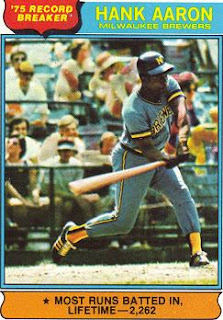 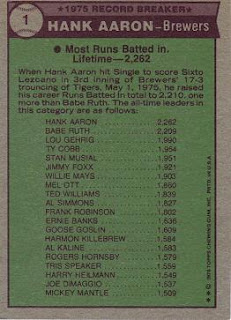 This is the third straight Topps set to have Hank Aaron as card #1. It's a nice action shot of Hank in a Brewers uniform taking a swing.

The back is quite interesting. The list of players is a who's who of great hitters up until the mid seventies.

My first table top baseball game was Superstar Baseball. My father bought it for me when I was 8 years old in 1975. It had 96 of the greatest players who had played through the 1973 season. They missed a few (probably due to licensing issues), but they got most of them right. All of the players on the back except for two (DiMaggio and Goslin) were featured in the game. I had a lot of fun playing games with the old timers and learning about the history of the sport. Seeing the list of players on the back of this card brought back some memories.
Posted by Matt Runyon at 5:14 PM