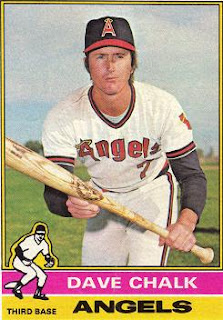 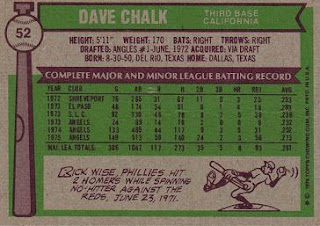 I am currently doing a Strat-O-Matic replay of the 1976 season. One neat thing about the game is that there is an option to show a picture of the batter and pitcher as the game is playing. I'm using a photoset that someone made from the 1976 Topps set. It's funny how so many California Angels players have this bunting pose on their cards. I guess that's why the Angel offense was so anemic in that era. :)
Dave Chalk was an infielder for California, Texas, Oakland, and Kansas City from 1973-1981.
He was an All Star in 1974 and 1975 and had some pretty good years in the mid-seventies. Dave was traded from California to Texas for Bert Campaneris in May 1979 and then was traded to Oakland in June 1979. Dave signed with the Royals as a free agent in 1980 and appeared in game 2 of the World Series (he walked, stole second as part of a double steal, and scored a run). Chalk played for the Royals in 1981 and then called it a career.
Posted by Matt Runyon at 6:58 AM