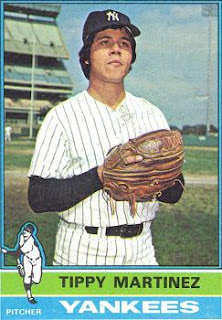 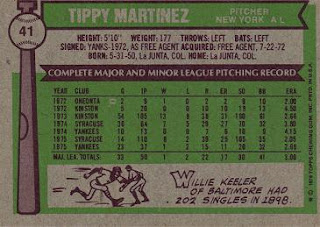 Until I saw this card, I had forgotten that Tippy Martinez played for anyone else besides the Orioles. He came up with theYankees in 1974 and shuttled between AAA and the big club. Tippy was traded to the Orioles with Rick Dempsey, Rudy May, Scott McGregor, and Dave Pagan for Doyle Alexander, Jimmy Freeman, Ellie Hendricks, Ken Holtzman, and Grant Jackson on June 15, 1976. Tippy would go on to pitch for the Orioles until the end of the 1986 season.
Martinez put together a good year with the Yankees and Orioles in 1976 (5-1, 2.33, 10 saves). He had several more good years until he started to fall off in 1985. Tippy spent some time in A ball in 1987 (probably rehabbing an injury) and was released in June 1987. He tried a comeback with the Twins in 1988 but was released after posting an 18.00 ERA in four innings. He finished his career with a 55-42 record, a 3.45 ERA, and 115 saves.
"Martinez may be best known for picking off three Toronto Blue Jays off first base in one inning during an August 24, 1983 game at Baltimore's Memorial Stadium. The Orioles, having replaced both their starting catcher and his backup while rallying to tie the game in the ninth inning, entered the tenth with reserve infielder Lenn Sakata in the game at catcher. Three consecutive Blue Jays hitters reached first base and each one, thinking it would be easy to steal a base on Sakata, took a big lead. Martinez picked off all three baserunners and then became the winning pitcher when the Orioles won the game on Sakata's home run in the bottom of the tenth."(wikipedia article). Here is an article about the game.
Martinez is currently the pitching coach for the York Revolution of the Atlantic League.
Posted by Matt Runyon at 3:14 AM