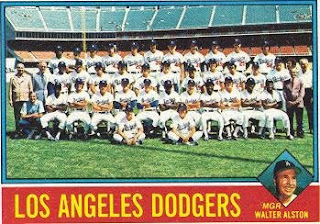 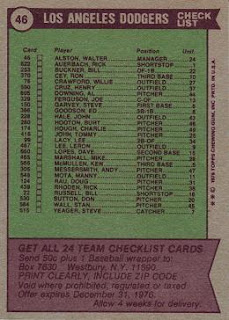 This was Walter Alston's last year of managing. He managed the Dodgers for 23 seasons. Under Alston's leadership the Dodgers won seven pennants and four world championships. The Dodgers finished in the second division only four times--7th in 1958, 7th in 1964, 8th out of 10 teams in 1967 and 1968, and 4th in the NL West in 1969. Los Angeles finished 2nd in the NL West every year from 1970-1976 except in '74 (when they won it). Walter had 2040 career wins as a manager, which currently places him 9th all-time. He was Manager of the Year six times.
Here is a 1966 article from Sports Illustrated about Alston.
A sometimes-overlooked part of the history of integration in baseball is when Alston managed Roy Campanella and Don Newcombe in the minors in 1946. Here is an article that talks a bit about that.
Posted by Matt Runyon at 4:45 PM