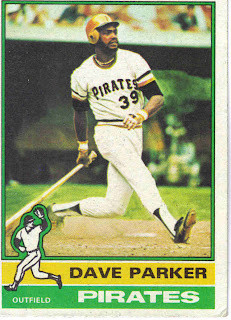 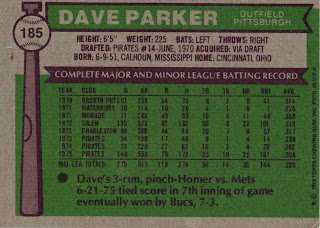 Dave "Cobra" Parker. Seven All-Star teams. Three Gold Gloves. Three Silver Sluggers. Five t0p-5 MVP seasons. One MVP award. If it weren't for the dump he took in the middle of his career he'd be in the Hall of Fame.

After those two great seasons, Parker was bound to have a bit of a dropoff in 1979. It didn't matter as he helped lead the Pirates to the World Championship. Dave was an All Star again and showed off his great throwing arm by throwing out two runners from right field. Dave was named the All Star Game MVP. Parker batted .310 with 25 homers and 94 RBI and won his third (and final) Gold Glove award. Here is a 1985 Baseball Digest "Game I'll Never Forget" article that talks about a playoff game in 1979.