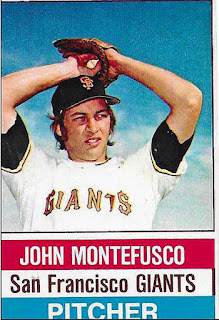 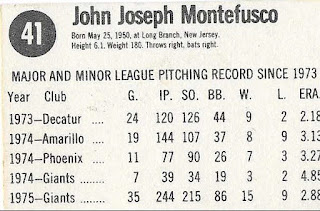 Hello! I finally got to a place where I can spend a bit each month on cards. One thing I decided to do was to work on completing sets from my prime card collecting years (1974-1981). I'm a big Giants fan, so a lot of the first cards I get for these sets will be Giants.

John Montefusco didn't spend much time in the minors. He was dominant in A ball in 1973 and really rose through the system in 1974, going from AA to AAA to the majors all in the same year. I may have seen him pitch in Phoenix in 1974, but I was only seven and don't have any specific memories of the games my dad took me to that year.

John had great  years in 1975 and in 1976 before he started to tail off a bit. Injuries hampered him and by 1979 he was struggling to stay in the rotation.

By the way, the card is in better shape than the scan indicates. I'm still learning how to operate this thing.