My first year of collecting was 1974. I was seven years old and really didn't know what I was doing. I'm sure I was hoodwinked a few times in trades with the neighborhood kids. I figured for this "6 cards in 30 seconds" activity I would pick the six cards from this set that are the most memorable for me. 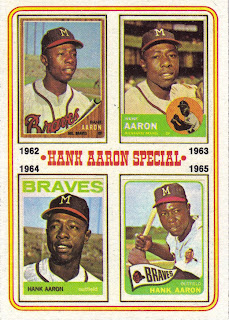 In my first pack of 1974 Topps I got one of the Hank Aaron Special cards. This is probably the one I got, but I'm not entirely sure. It was cool to see what the older cards looked like and I learned some historical things by reading the back of the card. I don't know how many hours I spent reading the backs of cards and memorizing stats. When I first got the card I wasn't sure who Hank Aaron was, but I learned all about him when he broke the HR record early in the season. I remember seeing it on TV at the house down the street. After that I figured that anyone who got the first six cards in the set had to be a great player. Topps should do a subset of "special" cards when a veteran is at the end of his career. They did one in 1985 when Pete Rose was about to break the hit record. More of these subsets would be cool. 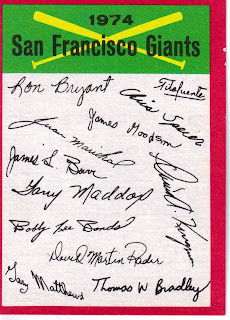 The team checklist cards were a good way to keep track of team sets. It was nice to have a separate team checklist card instead of marking up a team photo card. These were inserted in each pack, so they weren't scarce. It would be nice if Topps would start doing this again. 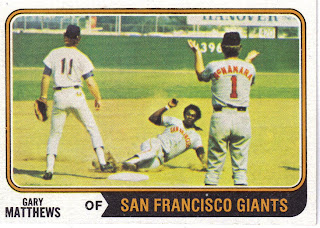 This is an example of the great action shots that were in this set. I didn't notice it much at the time, but the '74 set is probably one of the better sets for action photos in the 70s and 80s. The horizontal orientation is also cool. There were several horizontal cards in this set, but Topps didn't overdo it. This was the last year Topps did horizontal cards for quite a while. 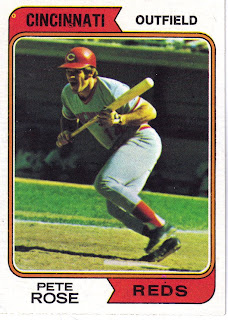 Here's another good action shot of my favorite player of the time. Pete really messed up later in life, but he was a lot of fun to watch back in the 70s. It looks like he's going to war in this picture. 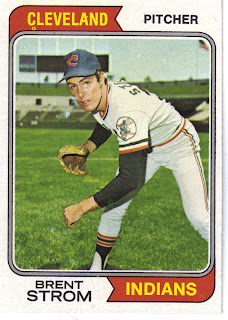 You're probably thinking, "What the heck is he doing here?" This card is memorable because the one copy of the card that I had for quite a while (until I bought a mint set years later) had the right corner torn off of it. My neighbor Jimmy and I were flipping cards on the family room floor of his house and his little sister came crawling over. She was crying and screaming like little ones often do. She picked up my Brent Strom card and stuck it in her mouth. It didn't take long for the top right corner to disappear. I still have that card somewhere, but I can't find it at the moment. 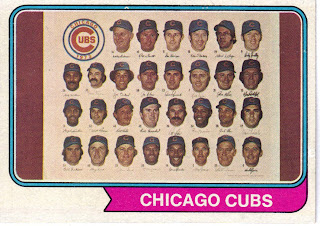 I preferred the Cubs and White Sox team cards during this era. I could actually see who was who in these pictures. It was a mystery why Topps did team cards in which the players were virtually unrecognizable. Now it's fun to scan a team card from that era, enlarge it, and see how many players I recognize on the photo.
The 1974 set design is kind of bland, but I think it's an underrated set.